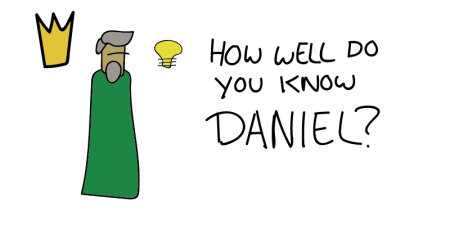 The book of Daniel is fascinating on many levels. It shares the compelling story of Daniel along with his friends as they overcome great obstacles to their faith in a strange and oppressive culture. It includes incredible stories of God’s rescue and of dreams and visions. It offers answers to some questions while leaving others open to a vast array of interpretations. Overall it presents a message of hope—to all generations—of God’s ultimate rescue for his people—things may seem hopeless, but better days are ahead.

To understand Daniel, the book and the prophet must first be understood within the context that produced both. Daniel shared his prophecy primarily for his immediate audience—those in his time and place. Ripping the stories out of that context is not helpful to discovering their meaning.

Daniel’s story begins right after Babylon’s first attack on Jerusalem (see 2 Kings 24). Among those things seized in this attack were “some of the articles from the temple” (1:2) such as gold and silver cups (5:2). Also taken were people from the royal linage of David including Daniel and his three friends (known best by the names of Shadrach, Meshach and Abednego) who play a significant role in the book. This was not an uncommon practice for conquering nations—take back the best the defeated country has to offer to serve the center of the empire at home.

The bigger picture in which Daniel was caught up was the fact that Judah was done. All of the previous prophecy and warning against impending doom was coming true. Because of their rebellion and sin, God’s people were being punished. Babylon was God’s chosen instrument. For the next seventy years, Judah as a viable nation would not exist. Many of her people would live in exile pushed to serve foreign gods in a strange land. What would become of these people? Did there remain a word from the Lord to them? This was the then and there. This is specifically what Daniel addresses. Everything that flows out of the book flows out of this context.

Two of the most well-know Daniel stories focus on unwavering faith in the face of immense pressure. From the start Daniel and his friends established their commitment to remain true to the Torah (chapter 1) and as a result gained some favor. But this did not shield them from future pressure to compromise their faith. Both the fiery furnace (chapter 3) and the lion’s den (chapter 6) were the result of them not caving into pressure but rather remaining faithful to their God and his will. In both cases, God rescued them dramatically—sending a powerful message to the Babylon king and to anyone else who may have been listening.

God has not forgotten his people. God will reward faithfulness even in exile. God is not cowered or neutered by Babylonian might. The Babylonian king—regardless of how it may appear—is not the most powerful force in the world after all. God is still very much at work in the world to bring about his ultimate will.

One message is clear from these stories (and all of Daniel’s stories)—hope remains. Do not give up. Remain faithful. God is planning a rescue.

King Nebuchadnezzar did not realize it but that is exactly what he was doing—not for himself and Babylon however, but for the people of God. His dreams (chapters 2 and 4) along with his son, Belshazzar’s “hand” written message (5) and Daniel’s own dreams and visions (7-11) all serve a similar purpose. While each contain different details, they all serve to further this story within the Story by proclaiming God’s ultimate deliverance of his people into a kingdom that far overshadows any that has come before it-including the mighty Babylonian empire

They all establish several significant truths:

“A Pattern and a Promise”

This could be how best to consider Daniel’s story. Perhaps instead of trying to pinpoint each vision; each prophecy; and each dream to some point, place or person in history—maybe Daniel should be understood as a message for all of history as we find ourselves living it. Jesus referred to Daniel to address corruption in his day. John uses Daniel to confront the oppression in his time in the Revelation.

Daniel offers us a pattern, that is, as long as the earth stands, evil people will seize power, corrupt nations and oppress God’s people. He also offers us a promise—through this, God will never forget his people, always be working to finish The Story and ultimately one day slay all the beasts. Then his kingdom will flourish forever. Like Daniel and his contemporaries—we remain in the journey—as aliens and foreigners in this world. Again, like him, our call is to remain faithful in the exile.

This entry was posted on Thursday, April 19th, 2018 at 1:44 pm and is filed under Babylon, Bible Reading, Biblical Interpretation, Church of Christ, Faith Stories, Fiery Furnace, God and Government, Hebrew history, Israel, Jewish Exile, Lion's Den, Nebuchadnezzer, Prophets, Shadrach, Meshach and Abednego, The book of Daniel, The Old Testament. You can follow any responses to this entry through the RSS 2.0 feed. You can leave a response, or trackback from your own site.